Undervalue Fresh Milk at our Peril 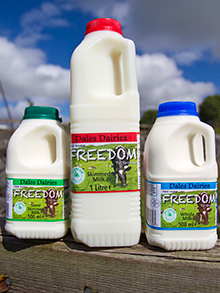 I love fresh milk and everything you can make from it, which is why I’m so passionate about Free Range Dairy Network. It’s such a great product that, I often wondered, as you do – how long you could survive just on fresh milk?

It seems you could survive for a long time on fresh milk, as long as you added potatoes and some oatmeal.

For example, if you’re an active male between 19 and 30 of average height and weight, then one gallon of milk and eight pounds of potatoes will supply the RDA of most nutrients, falling a little short on the iron, folate, and niacin fronts, missing a lot of vitamin E, and striking out completely on molybdenum. Chug two gallons of milk with your spuds and all you’re missing is about two-thirds of your vitamin E and, of course, your molybdenum, which comes from oatmeal.

While no sane nutritionist would recommend a diet consisting of just two foods, (however if you had to do this) in the interest of economy, you could do a lot worse than potatoes and milk.

I find that strangely comforting. In these scary economic times, even if things get really bad, we live in a country that can produce a nutritious superfood to supplement our diets. Except that staple, fresh milk, which has been taken for granted for so long is facing a dairy crisis that threatens not only our dairy production but also our food security.

The UK’s largest supplier of fresh milk, Arla, is warning that milk supplies could run dry in the UK as increasing costs in dairy production means farmers can no longer cover their expenses.

For too long milk has been undervalued and seen as a loss leader by retailers, but every time a price promotion saw milk sold for 4 pints for £1, dairy farmers would leave the industry. This is because the cost of production exceeded the price they got for their milk. Now because of rising costs dairy farmers are producing less milk with production down by 2% in February and 4% in March.

Arla’s boss Peder Tuborgh also noted that the price of milk in UK supermarkets is 7% lower now than it was 10 years ago – despite climbing costs for farmers. Additionally, retailer contracts haven’t aligned with rising production costs, resulting in farmers abroad earning 15% more than UK dairy farmers.

We need to recognise that the extra you pay for the milk is not a luxury but a necessity if we want to protect a superfood which is a fantastic food source. This might be a controversial thing to say in the present climate of soaring costs and inflation, but we must pivot away from cheap food towards more sustainable models of food production as well as examine our relationship with food.

We need to value our food more, and how its produced, because when we value something we are less likely to waste it. By paying a bit more for our milk we support better dairy practices and keep those farmers in business which benefits us all.

By valuing food more and wasting less, an average family could save £500 per year as well as reducing our carbon footprint. Meaning you could invest that b

ack into a great tasting Pasture Promise free range milk with all the benefits that brings to you, the cows, the farmers, and the local environment and keep our dairy farmers in business.

It will be interesting to see what’s next for Britain after the release of the National Food Strategy especially since its release we are in a very different economic crisis. However instead of waiting for the government to act which might be too late for the dairy industry, let’s show our support and start making better milk choices now.