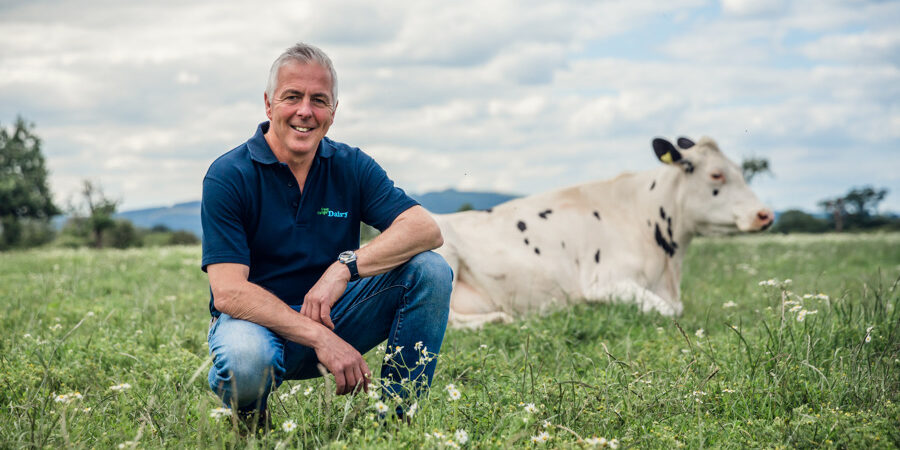 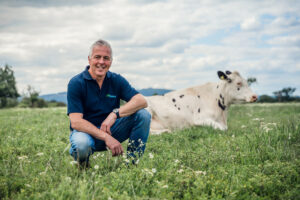 This hasn’t been an easy decision, but I am writing this post to inform you that I am resigning as a Director of Free Range Dairy Network, with effect from 31st October 2021.

My journey with free range milk and the Pasture Promise logo began back in 2010, when I was running a dairy farm business in Somerset. It was the year that news of a proposed ‘mega dairy’, to be built in the Lincolnshire village of Nocton, was announced.

At that time I was running a large dairy farming operation with just under 3,000 cows. However, these cows were spread across 13 farms in Somerset and Wiltshire, with herd sizes ranging from 120 cows to 300 cows and all with access to grazing in the summer months. Plans to construct an operation with 8,500 cows all on one site and housed in sheds 365 days a year, set alarm bells ringing in my mind. So I began to look for a way to distiguish the traditional, grazing herds we ran from the new, industrial-scale operations that I felt risked turning people off milk and dairy products.

Whilst walking some of our pastures back in September 2013, I pulled up a fistful of grass and made a promise to keep cows in fields. That image went on to become the Pasture Promise logo you see today. We are grateful to all the farmers who have subsequently made that promise and those who have walked into supermarkets and asked for free range milk.

I had long held concerns about the public perception of British dairy farming and the lack of awareness of the creeping intensification of milk production on farms. Relentless pressure on producers to cut costs, in order to feed demand for cheap milk from the big supermarkets, meant that hundreds of farmers were leaving the industry every year and those who remained were advised to get bigger or get out. This consolidation in the dairy industry led to fewer, larger farms, with many cows having little or no access to the fields they had once enjoyed. However, thanks to carefully crafted advertisements and images of cows in fields on milk bottle labels, most people I spoke to still thought all cows lived long, happy days on small, family farms, grazing lush green pastures.

We have come a long way over the last ten years. Fortunately planning for Nocton Dairy was turned down and even a later proposal with half the number of cows was rejected. However, this has not stopped the steady decline in producer numbers and the rise of bigger farms with more cows, producing higher yields of milk and having little or no access to the great outdoors.

There are still a lot of challenges for the traditonal, family farms that remain today and many new ones related to climate change and the environment. The current economic climate for small, family farms, with the added uncertainty around future government support, is once again causing many to consider their future. Brexit and the trade deals now being put together with countries outside the EU, will continue to make it tough for those running small-scale farms to compete with cheap milk and dairy products from overseas.

Having spent 40 years in farming, I have become accustomed to the ups and downs of dairy farming, both at farm level and in the wider world. But my desire to promote all that’s good about British farming will never wane and Free Range Dairy has provided a wonderful channel for that passion. I am enormously proud of what I and my fellow director, Carol Lever, have acheived over the last 7 years since we set up the Free Range Dairy Network CIC. I truly believe that we have, in some small way, made a difference and I hope the organisation will continue to carry out its mission to win traditional, pasture-based dairy farmers the recognition and reward they deserve, well into 2022 and beyond.

That ‘journey’ that I referred to earlier in this post has challenged me at times to the point where I began to wonder why I ever mentioned that not all milk is the same. It was uncomfortable for some, who felt threatened by the kind of questions people began  to ask about the life of cows and the provenance of their milk. But I hope that those who found those early debates uncomfortable at the time, now see Free Range Dairy as a positive force, making a real difference for farmers and their cows.

One of the defining moments in giving more people the chance to choose milk from cows grazed in fields for a minimum of 6 months a year, was Asda’s decision to stock Free Range Dairy Farmers Milk in March 2017. The milk is currently stocked in around 300 stores across England, Wales and Scotland. It’s fantastic to see a ‘middle tier’ milk sitting between standard and organic lines on the shelves of a major retailer.

I have spent many days thinking about all the amazing people who have helped me and Carol build my original ideas around free range milk into something tangible – a formal orgnisation with farmer members, a registered trademark with independently audited standards and milk in bottles carrying the Pasture Promise logo.

I will always have fond memories of those early meetings, which I was able to run thanks to some generous funding from The Muriel Jones Foundation. I am eternally indebted to Suzi Morris and her then team at WSPA (now World Animal Protection) and Philip Lymbery at Compassion in World Farming for their support, the farmers who came to those first meetings and actually took the time to listen to what I had to say, Chris & Steph Stephenson from Stephenson’s Dairy in Lancashire who enabled us to put the first Pasture Promise free range milk in a bottle (in collaboration with the ever-supportive David Oversby at Dales Dairies).

The work we do with Cotteswold Dairy in Gloucestershire has given me great pleasure and helped us to get substantial volumes of milk into catering and hospitality businesses across the country. The Severn Vale is where I grew up and working with farmers in the vale and the surrounding areas has given me a wonderful opportunity to revisit old haunts and reconnect with my home county. My thanks to Cotteswold MD, Geroge Workman, his team and their farmers for all the hard work they have put in to promote Pasture Promise free range milk.

I cannot name everyone who has in some way helped, here. But whether you are a TV celebrity, a farmer, a milk processor, a journalist, head of an NGO, or just someone who believed in what we were trying to, achieve, I thank you all from the bottom of my heart. Collaboration and trust have been key in getting to where we are today. You were there and you made a difference.

Like a free range cow, I am now moving on to pastures new. I still continue to run a farm business in the south west which, funnily enough, has beef cattle, sheep and several acres of cereals but no dairy cows. With my spare time I am setting up a new business to promote farmers selling food directly from their farms, like those Free Range Dairy farmers who have milk vending machines at their farm gate.

Please continue to support Carol and all those who are producing milk to Pasture Promise standards today. British dairy farmers need people to understand more about the true value of cows in fields and, in my opinion, as long as there are cows in the fields there is hope in this world.

I don’t have any tattoos, but if I ever I do it will be a discreet little green circle with what looks vaguely like someone holding aloft a bunch of grass.