Can a Kindness Economy deliver what the Agriculture Bill can’t? 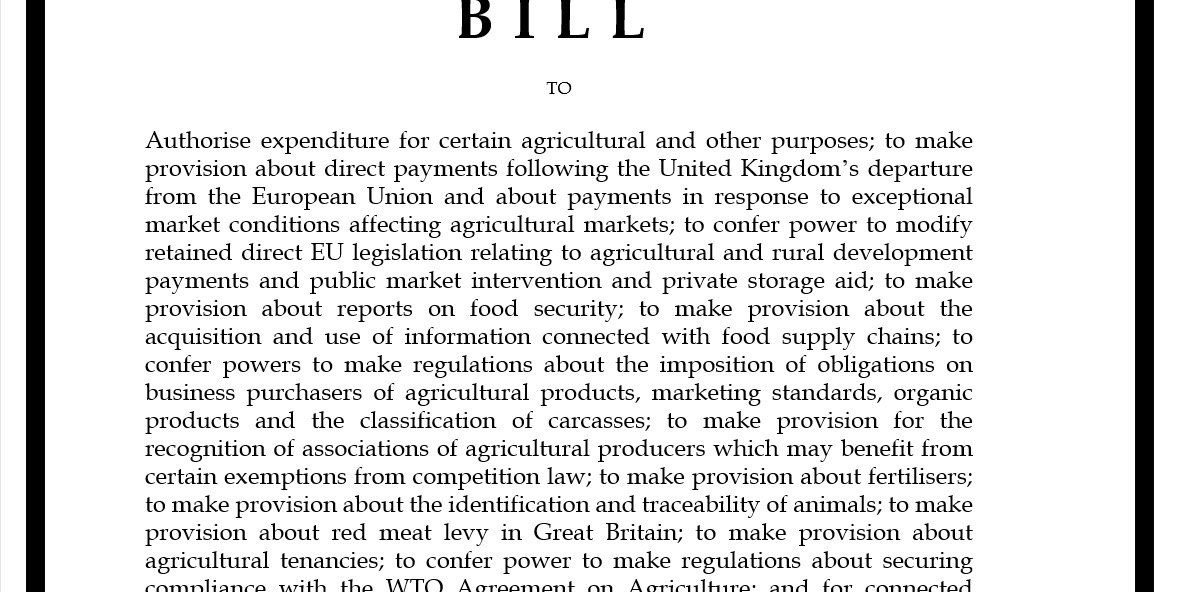 The Agriculture Bill was introduced to set out the way in which agriculture will be funded after leaving the EU, with the introduction of a new “public money for public goods” payment scheme putting the focus on animal welfare, the environment and sustainability.

The Bill recently had its third reading in the House of Commons and it was passed without any amendments. Whilst those representing British farmers broadly supported the Bill, there were areas where it was felt improvements could be made. Farmers, environmental and welfare NGO’s and MP’s called for British animal welfare and environmental standards to be protected by legislation, to prevent the importation of food produced to lower standards.

In its 2019 manifesto, the Conservative Party said “Just as in the wider economy we can combine strong employment growth with high employment standards, so we believe that British farmers and fishermen should be able to profit by producing food and fish that are the envy of the world – both for their quality and the high standards to which they were produced”.

We want people, both at home and abroad, to be lining up to buy British. And one of the great opportunities of Brexit is the chance to lead the world in the quality of our food, agriculture and land management – driven by science-led, evidence-based policy. And we want those same farmers and fishermen to act as the stewards of the natural world, preserving the UK’s countryside and oceans as they have for generations.

A recent Which? report found that 93% of people expect food standards to be maintained after leaving the EU and that 72% think food imports from countries with lower standards shouldn’t be allowed. And it seems, from the Conservative Party manifesto extract above that the government is committed to continue to driving higher standards in the production of our food.

But, despite assurances that chlorinated chicken will never be imported to Britain and that our high farming standards would not be undercut by sub-standard imported food, the government has opposed an amendment that would enshrine in law that we could not agree to trade deals that would allow the imports of food produced to standards illegal here.

Some MP’s have recently said they believe that the standards of imported food are an issue for the Trade Bill (a Bill to make provision about the implementation of international trade agreements), rather than the Agriculture Bill. In response to the National Farmers Union (NFU) President, Minette Batters, said “Our trade policy must reflect our moral responsibilities to the planet and the people and creatures that live on it – protecting our natural environment, caring for our farmed animals, and working toward a more sustainable, climate-friendly way of farming and food production. These are issues that cannot be wished away or presumed dealt with by brief pledges in a manifesto or verbal assurances in media interviews.”

These days, it’s hard enough trying to understand the true provenance and composition of food that has been produced in the UK, never mind that which has been shipped in from across the globe. Food businesses are constantly devising new ways to paint a picture of quality and trusted provenance around cheap food in the hope that shoppers will make a snap decision to buy, without flipping pack over to examine the list of ingredients, or the “produced in” information on the back of the pack.

We still have issues around food production methods and misleading labels in the UK grocery market, but we have come a long way. Whatever, you may think about the safety of British food, we have banned many practices such as giving growth hormones to farm animals and we certainly don’t permit practices such as washing chicken carcasses with chlorine. Despite criticism from some quarters, the Red Tractor scheme has established a good baseline for food production on British farms and is driving up standards and evolving rapidly to meet changing demands in the market.

Without legislation to protect our farmers from competition that comes from cheap food, produced to lower standards, it is will become even more important that people are able to make more informed choices about how their food is produced. This why campaigns like the Compassion In World Farming (CIWF) ‘Honest Labelling‘ campaign are really important. We want people to know that when they see the words ‘Free Range’ on milk and dairy products, they can be confident that they only come from cows free to graze for a minimum of 18 hours a day, for a 180 days a year, as required under the Pasture Promise logo.

I am hopeful that a change in our shopping habits that has been established during the Coronavirus pandemic, may drive people to make better food choices going forward. It could be that we will enter a new era, which the high street guru Mary Portas calls the ‘Kindness Economy’ – an economy founded on the things we care about, in which kindness develops into social and economic capital.

In an interview with the Guardian, reflecting on how what consumers want has changed, Portas talks about the fashion industry’s drive to get things to market as quickly and cheaply as possible over the past 20 years. She says “it was all about how quickly things were turned around. So you had businesses that were just fast fashion – it was about operations, it was about physics of the business”. This really strikes a chord with me: the food and farming industry has been on a very similar journey over the past 20 years, with attention much more on the physics of the business, rather than the food it delivered.

As consumers, it is time we turned our attention back to the food we eat (and the farms that supply it), rather than just grabbing what logistics and consolidated processing of food puts in front of us. Let’s think about how that Kindness Economy might work for all of us. Portas says “every £1 we spend is a vote, a for how we want to live“. I have said a similar thing many times about the milk we choose – every time you buy milk, you vote for the farming system that produced it. Your choice really matters: not just for you and your family, but for all those involved in producing and selling it, as well as the resources used in its production.

I believe most of us will reflect on what we want our lives to look like in the post-Coronavirus era and many will have committed to changes already. Please shop kindly when you buy milk and meat: take a little time to think about how your choice impacts on farmers, cows and the environment.