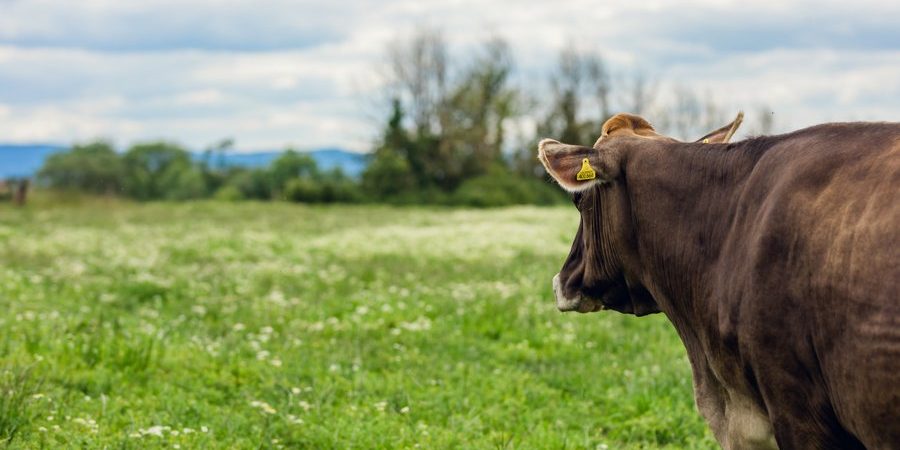 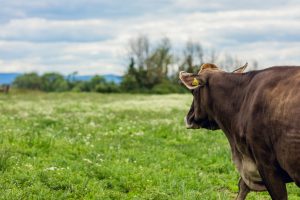 It’s such a simple thing for most of us to open the door, step out into the sunshine and go wherever we please. So it’s no surprise perhaps that many are already starting to feel trapped, as restrictions on our movements are imposed to halt the spread of this ruthless Coronavirus pandemic. There are now serious concerns about the affects of confinement and solitude on the mental health of millions of us.

Ralph Waldo Emerson, the American lecturer, poet and essayist once said “For what avail the plough or sail, or land or life, if freedom fail?“.

Looking out of the window here, it is evident this is very much a ‘human-centric’ crisis, with wildlife and farm animals blissfully unaware of our worries. But we should not assume freedom matters any less to them, or they deserve freedom any less than we do. A study by researchers at the University of British Columbia showed that cows would push at a weighted gate to gain access to the great outdoors. The study’s lead author, Marina von Keyserlingk, said “Our findings show cows are highly motivated to be outside“. This comes as no surprise to those of us who have had the privilege of watching cows run and skip when they feel the soft grass beneath their feet, when they are let out for the first time. It is a time of great joy for cows and farmers alike.

Late March or early April is typically the time when Free Range Dairy farmers open the gate to give their cows the freedom of the fields, as this is when the weather warms up and the grass really starts to grow. This year, despite us being under ‘lockdown’, free range cows will spend the next six months, or more, happily grazing in lush green pastures, for 18 hours a day; just coming in to be milked. All farmers producing milk under the Pasture Promise logo are required to commit to giving their cows this freedom.

This wonderful event is something we would normally welcome local people to come and witness first hand on farms but, for obvious reasons, we aren’t able to do that this year. We believe it’s important to build trust and integrity in the Pasture Promise logo and the words ‘free range’. That’s why we publish details of the grazing dates for individual farms supplying milk under the logo, every year. We don’t want to fob people off with woolly averages or flimsy claims that “cows have access to grazing“.

Below is a table with details of the dates cows were turned out and housed, on individual farms, in 2019. You will see that the number of days cows were grazed does vary between farms. This is depends largely on location and weather conditions. As we all know, the UK weather is very unpredictable and can be very different between north and south. 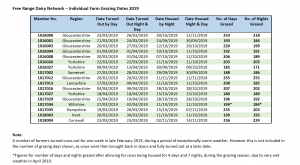 The 2019 grazing season began with a false dawn for some, when a record February temperature of 20.6 degrees Celsius was recorded in Trawgoed, in Wales, making it the hottest February day on record. This was in stark contrast to the ‘Best from the East’ that had brought freezing temperatures and snow a year earlier. Cows were treated to a wonderful surprise, when many of our farmers opened the gates to allow them a brief foray into the sunshine for about a week, until the arrival of Storm Gareth in early March. Farmers were forced to bring their cows back indoors and the wet weather, throughout the first few weeks of March, then delayed full turnout until the beginning of April for many.

What was great about the 2019 grazing season was the fact that once the cows went out in late March / early April, almost all stayed out night and day until the autumn. Just one farmer had to bring his cows in for a few days, following heavy rain in April. The grazing season on most farms ended mid to late October, when cows were housed night and day, with a few managing to extend grazing until early November.

There is so much worry and uncertainty in the world today. No one knows what 2020 will ultimately mean for all of us. But we are working with farmers to establish strong local food networks, so that more people can access great tasting free range milk from local suppliers. In the meantime, I hope the images we see of cows being turned out to grass now, will remind us all of just how important our freedom is and give us hope for the future. Stay safe everyone.