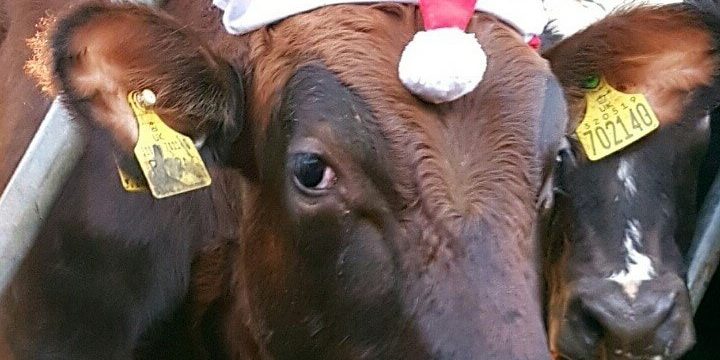 Christmas time is always a great time to share a Christmas message from our farmers. As we go from 2019 into a new decade, Jenni Hobbs, looks back over the years 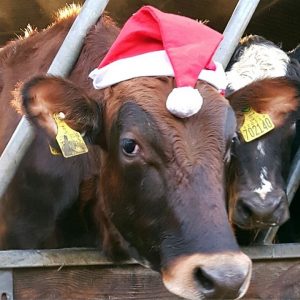 Another year – and 2019 didn’t disappoint. Here in the Gloucestershire Severn vales the cows have continued to enjoy fresh, grazed grass but not without the hiccups always associated with farming. As a nation our favourite topic is weather, and as farmers it’s an obsession – for good reason.

We keep in contact with farming friends overseas and albeit we have issues regularly to deal with, their extreme weather always make us feel humbled and grateful that our temperate climate is never as dramatic and damaging as theirs. Not least with the Southern Hemisphere. Fires, floods, droughts are damaging to the point where entire crops are decimated and worse, where their entire flocks and herds are also. When I was just 6 years old in 1976 the drought raged on for 15 months and I remember being so desperate I would sneak into our old, large chest freezer to cool off! The thought of that dangerous act itself now makes me shiver.

Farming during that period was difficult – but working with nature and it’s changing seasons and variations has always been part of being a farmer. I remember my dad looking red and sweaty for most of the time, as there was no escape from the heat. It might have been unseasonably hot, but he still had all his farming tasks to complete from harvesting, baling, silaging, feeding, milking alongside his salmon fishing on the River Severn keeping him tired and busy but food on our table.

The changing weather, farmers are used to but something we hadn’t expected is the changing relationship people have with food. It seems we’ve got so used to an abundance of food that we’ve started to take it for granted – there will always be food on the shelves and fresh milk in the chiller aisle. But changing weather conditions, some getting more extreme, as well as past periods of history, means we shouldn’t be so quick to think this will be the status quo from now on.

History can go in cycles, so instead of thinking we can always just fly in food from overseas to fill up the shelves, we should really be doing more to be self-sufficient in food production and that means supporting the sustainable food we can produce here in the UK. For different reasons, those times of desperation could come around again, but this could be after all our traditional dairy farms have been lost. How desperate will our situation be then? I firmly believe that we should – and can produce more local food. It’s important before it’s too late to support the sustainable farming industry we have on the UK, a system that works with nature and not against it, for when those lean times come back.

With the Free Range Dairy movement, we’re working to keep more traditional methods of stock farming alive. We are trying to build resilience into it, where the farmers are paid a fair price to enable them to continue to farm in a manner which gives more freedom to our cows during the drier, warmer months. We also look after our hedges, our waterways, the soil and pasture as well as the cows and next year we hope to be a new home to local bees.

Pasture Promise guarantees that the cows have real access to pastures, enabling them to graze for a minimum of 180 days and nights a year and 18 hours a day. It’s a clear standard, one which we have not missed since we began. Pasture is key to the taste of our milk and the happiness of our cows.

As dairy farmers we’ve always farmed this way, it’s not any different to the thousands of years since more organised, domesticated farming became the way of life as the population rose. Subsistence farming became business farming as more and more towns grew and more of our population moved away from producing their own food. Outside looking in, shoppers want more transparency about how their food is produced. It is always said that cheap food comes at a cost and it does. The rise in factory farming came about to deliver cheaper food through streamlining production costs and logistics. We never wanted to go down that route as we love the farming we do and our cows’, but it’s been hard.

Looking Forward to the Future 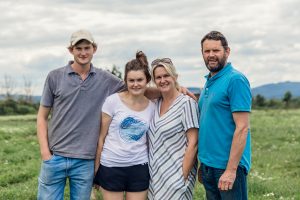 year. Fresh milk was so undervalued that we were losing money to produce it, we saw friends in farming either get out or scale up into more intensive units and didn’t know what we should do. We’ve had three generations of dairy farmers on this farm and it was with a heavy heart we thought it could all be lost on our watch! Being part of Free Range Dairy Network offered us hope and the premium we got from being part of the scheme has made a huge difference.

Instead of going out of dairy we now have hope for the future as two of our children Emily and Ollie, have now started their own dairy business on the farm. So instead of going out of business, we’ve expanded. Emily runs a successful Gelato business called Wholly Cow and Ollie has just started a vending machine so you can buy our fresh free range milk alongside our gelato.

We’ve seen many changes good and bad but this year we are grateful for everything we have. It looks like another generation of Hobbs will be carrying on our traditions and for that we are truly grateful.

So, as 2020 fast approaches and we look back on another year fast gone by, we wish everyone a peaceful Christmas and a Happy New Year.