Restoring the value in liquid milk 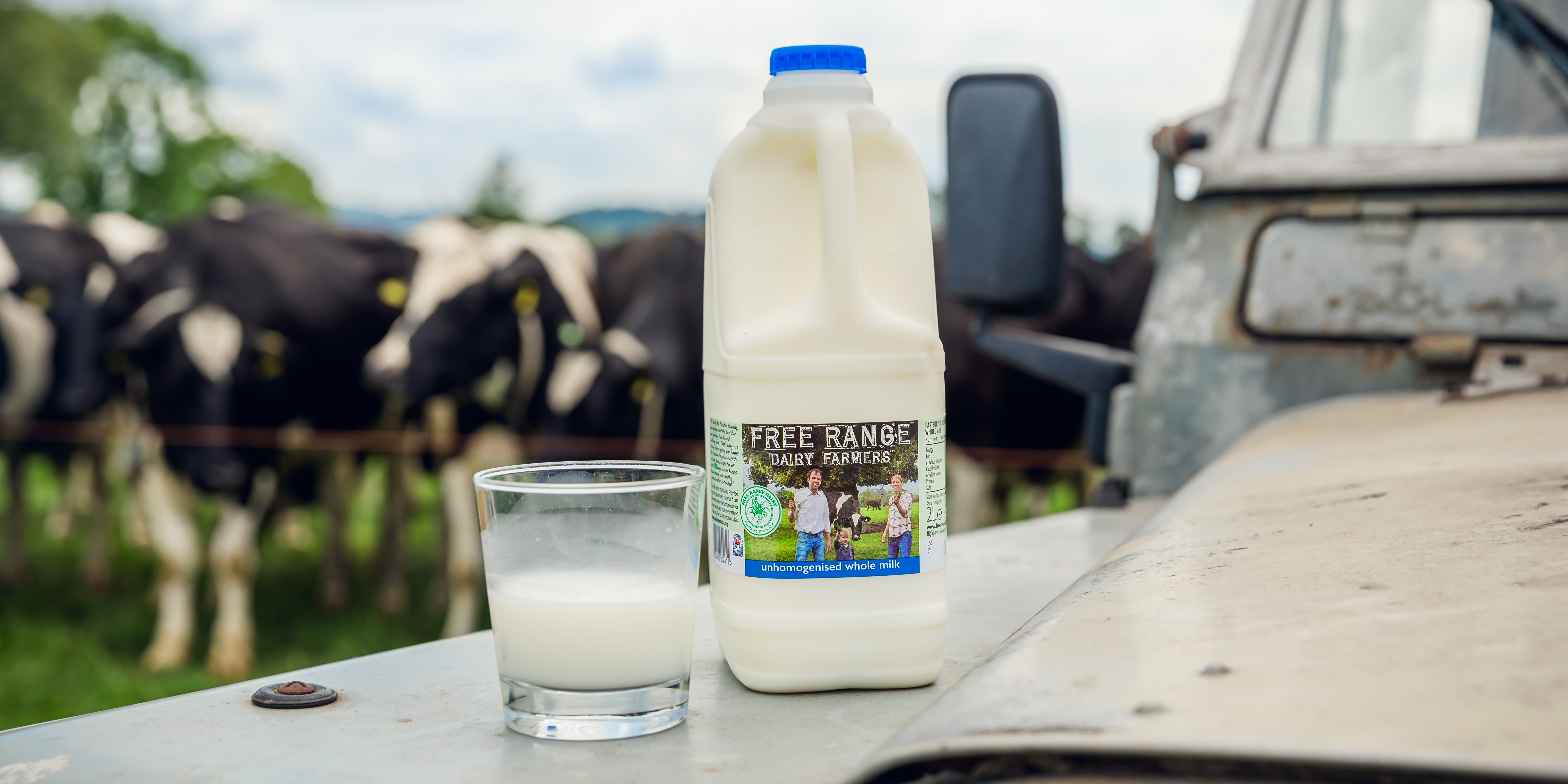 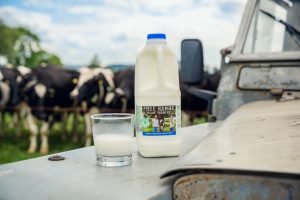 Recent news of the closure of Tomlinson’s Dairies, in North Wales, has led to growing concerns about the future of the liquid milk market in the UK.

Until a few weeks ago, the dairy business based in Wrexham collected milk from around 80 farmers, 44 of whom were on aligned contracts to supply Sainsbury’s supermarkets and 35 on non-aligned contracts, supplying milk for other customers.

According to reports from AHDB Dairy (the dairy sector levy board), Welsh milk production is estimated to have grown by 123 million litres (7%) between 2017 and 2019. This is despite producer numbers in Wales having fallen by around 20% in the past 10 years, leaving just 1,660 in business today (Source: Food Standards Agency).

Following the closure of Tomlinson’s Dairies, milk processing capacity in Wales is now estimated at around 956 million litres a year. This means that any further growth in milk output from farms in Wales next year, would create a surplus of milk equivalent to half the current production from farms (over 1 billion litres).

Across the UK, producer numbers are falling, yet milk production continues to grow. According to AHDB Head of Markets Specialist, Chris Gooderham, the Welsh Dairy herd grew by 245,000 cows in 2018 (a year on year increase of 3,000). This increase in cow numbers, combined with an increase in milk yields per cow, more than offsets the loss of production from the 50 farmers who quit in the past 12 months.

Meanwhile, dairy giant Muller has announced that it is dropping 14 farmers supplying milk in North East Scotland, as it seeks to deal with a surplus of milk. In a report by BBC News the company said that “an unprecedented 25% surge” in milk production since 2014, meant that supply was now “substantially” outstripping demand. This means that surplus milk in Scotland is being shipped to England, resulting in 6,000 tanker movements, covering 2.5 million miles a year. The company, it seems, can no longer justify collecting small volumes of milk from outlying farms and is introducing new transport charges for its farmers.

Milk production from farms in Scotland has risen by 55 million litres (4%) in the past five years. This, combined with the loss of numerous, small processing sites, means the overall surplus of milk in Scotland is estimated to reach 214 million litres in 2019/20.

The volume of liquid milk consumed in the UK fell 1.7% in the last year, as tea and breakfast cereal consumption declined and more consumers chose plant-based alternatives to add to their coffee. However, milk is still used by 96% of households in the UK today.

But why do we continue to have a position of oversupply, when milk prices are so low and dairy farming is so unprofitable for many farmers? Unfortunately, for most producers, maximising output is the only way to survive. Most feel powerless to do anything about the price they receive for their milk and have become resigned to the fact that they will forever be price takers, rather than price makers. So, as some quit, others are increasing herd size and pushing cows for more milk, to maintain their monthly milk cheque and spread their costs over more litres. Worryingly, in an industry where over supply is the problem, more often than not, the response to low prices is to increase supply.

The retail giants have created an expectation for cheap food, backed by a carefully crafted assurance that all is well behind the scenes. Marks & Spencer (M&S), for example, recently announced that they were cutting the price of one litre of milk in stores, from 89 pence to 85 pence. But, to assuage fears about what this meant for their farmers, they reminded customers of their ‘Milk Pledge’ to ensure their dairy farmers will continue to receive an “industry-leading price” for the milk they supply.

Just last week, whilst we were at the Welsh Dairy Show, NFU Cymru (National Farmers Union, Wales) called on MP’s to investigate the UK’s ‘broken’ liquid milk market. Milk board chairman, Gareth Richards, told the Farmers Guardian that whilst some retailers paid a fair farmgate price, often based on costs of production, only about 7% of UK milk was sold this way. In the same report dairy analyst, Chris Walkland, said that some retailers were robbing the poor to pay the rich, by screwing milk processors down on their processing fees, whilst paying their own farmers a “handsome price”.

“For me, hope comes from the experience we have already gained with Pasture Promise free range milk and it begins with challenging the status quo”. 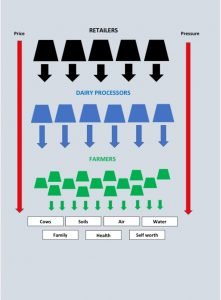 Speaking on BBC Farming Today yesterday, British Retail Consortium spokesman Andrew Opie, attempted to deflect blame for the current liquid milk sector, away from the major retailers. Yet, over 75% of the liquid milk sold in the UK is bought in the supermarkets! My simple graphic here illustrates how downward pressure is applied through the dairy supply chain.

Retailers squeeze processors, who are forced to look at ways to cut margins and that puts pressure on the price they can afford to pay farmers. But for the farmers at the bottom of the chain, there is no one they can turn to, to ask for help.

The simple fact is two litres of milk cannot appear on supermarket shelves for £1, unless someone, somewhere in the chain, is prepared to subsidise that price. When some retailers are willing to support milk as a loss leader on their shelves in this way, competition drives others, who are not prepared to subsidise the product in this way, to match the selling price. As a result, that price support comes out of processors’ and farmers’ pockets.

The pressure on farmers to produce milk for such low prices, manifests itself in the life they can afford for themselves and their families and the life they can afford their cows. Ultimately, persistent low milk prices either drive them out of business or lead them to develop bigger and more intensive farms. This demands more of themselves, their cows and the natural resources at their disposal, placing more pressure on people, cows and the environment.

The real story of great British milk and the farmers and cows that produce it, has been lost in the relentless price competition that has driven consolidation of processing, distribution and selling into the hands of a few big players. Red, white and blue washing, with Union Jack labels and fake farm labels, has been used to mask what’s really going on and rendered milk a cheap commodity.

It is clear, we are in a mess and no wonder many consider that the liquid milk market is broken. But, I believe we can fix it. For me, hope comes from the experience we have already gained with Pasture Promise free range milk and it begins with challenging the status quo. There is no silver bullet and it will take time – admittedly too much time for farmers unable to find a home for their milk in the coming months, or survive the winter on the price they are paid.

“Don’t tell me milk doesn’t matter to people, when 96% of UK households use it”.

If we want a truly sustainable dairy industry that delivers great tasting milk and fairly rewards farmers, we must disrupt the market and I mean really disrupt it – like tear it down and start again. I’m not suggesting we have a bonfire of supermarkets or scrap the giant processing facilities that process much of our milk. Instead, we must change the way business is done in the dairy industry. We must reverse the relentless downward pressure on prices and margins, by pushing the true value in milk up the chain.

I know that shoppers have become accustomed to cheap and abundant food of all kinds and that added value with a higher monetary cost can be a hard sell. But, that isn’t a reason not to do it. Don’t tell me milk doesn’t matter to people, when 96% of UK households use it.

Right now we are seeing how dairy faming matters to people, in the form of concerns about its impact on cows, the planet and our health. When the farming matters, even for negative reasons, it means farmers are in the spotlight and this creates an opportunity for then to seize the initiative. Free Range Dairy Network is encouraging people to think about how their milk choice can make a positive impact on all these things.

It is difficult for some in the farming industry to accept that, in order to create real value in milk, we need to differentiate it at source. I have previously been accused of pitching farmer against farmer, when suggesting that not all milk is the same. I’m sorry, but it is vital that consumers are able to purchase milk in keeping with their personal values and beliefs, if milk is to shake off the stigma of its cheap commodity status. If we want to build value in milk we have to invite questions on how it is produced, rather than hide behind false perceptions.

The Pasture Promise logo is not a milk brand. It represents a clearly defined farming system, founded on freedom and fairness, presenting a badly needed, value-added proposition for farmers and milk processors. By collaborating with dairy companies, to secure a firm commitment to rewarding farmers for giving their cows the freedom to graze for 180 days a year, 18 hours a day, we are challenging the market to pay more for milk and it’s working.

Four years ago, there was no free range milk in the marketplace. Today, around 1 million litres of milk a month are sold under the Pasture Promise logo. We are making a real difference for some farmers now and our Network is growing. But, we need to grow if we are to create opportunities for others.

When things are broken you sometimes have to start all over again, with a very different plan. We have that plan. So, please support us and ask for the Pasture Promise label wherever you buy your milk.