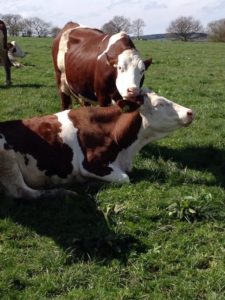 This was a question someone posed in a recent article in Forbes magazine. The writer was fascinated by a video of a cow using a mechanic brush, grooming herself and having a good scratch at the same time.

I think he’s right in that people are more interested in the life of farm animals, the cows producing the milk. The difference is that this relates to a way of farming in American where cows rarely go outside, so a brush is a fun way to break up the day. However, this type of farming system is not just prevalent in America as there’s been a rise in this type of system in the UK too.

It’s hard to believe but although we’re a nation of animal lovers, there are no laws in place to ensure cows have the right to graze. The closest it comes for cows is one of the five freedoms for farm animals, set out by the RSPCA, which say animals should have the freedom to exhibit natural behaviour. Anyone watching our latest video of cow turn out can see the joy cows get from being outside and that grazing is a fundamental expression of natural behaviour. Whilst grooming is important to cows, what’s also important is having the space outside to groom each other, roll and lie in grass or even have a scratch on a handy tree.

The cows themselves are telling us they want to be outdoors. A study found that cows worked hard to access pasture, especially at night. It looked at how hard cows pushed on a weighted gate to access food when indoors in comparison to having access to pasture. Cows worked just as hard to go outside as they did to access fresh feed when they were hungry.

“Our findings show cows are highly motivated to be outside,” said Marina von Keyserlingk, the study’s lead author and an animal welfare professor in UBC’s faculty of land and food systems.

People are becoming more interested in how their food is produced. A YouGov poll by animal welfare organisation World Animal Protection, found that 86% of people surveyed agreed that UK dairy cows should be able to graze on pasture and should not be permanently housed indoors.  This increased to 87% of respondents who wanted to buy free-range milk from pasture-grazed cows and for farmers to receive a good price for their milk.

So, coming back to the question – Do Happier Cows Make for Happier Consumers? According to Mintel market research over 90% of the population still drink milk in one form or another.  I think milk drinkers knowing the cows are happy makes them happy, but ultimately the type of farming system the cows live in lies with the milk buyers and drinkers.

If you want to make a more sustainable, ethical milk choice, we have a solution for you in the Pasture Promise logo. Only free range milk from cows that graze a minimum of 6 months per year can carry the logo. We know cows love to be outside and that’s why our main standards is their grazing rights, and when we say the cows go outside, that means all night too.