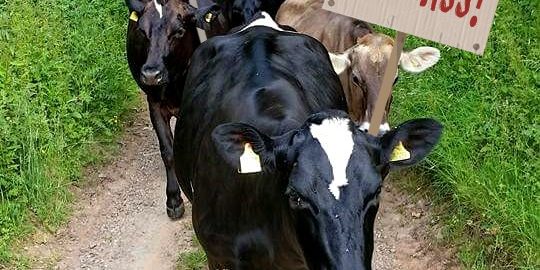 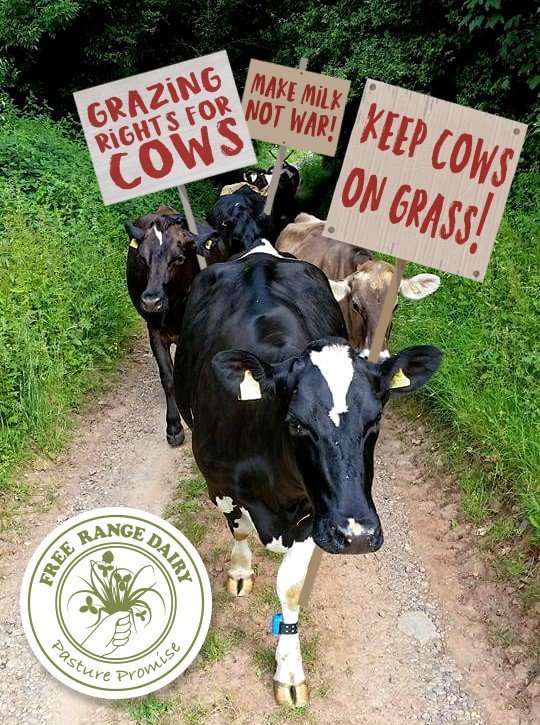 The way milk is produced on farms has changed beyond all recognition, over the past 30 plus years in which I have run dairy herds and many people have fallen out of love with milk. But, I believe we can make milk great again, by connecting farmers and consumers and telling the truth about its provenance. Transparency and integrity are key and that’s why ours is the only milk labelling scheme, to publish the grazing dates for individual, participating farms every year.

Our members and their forebears have grazed cows in fields for generations and want to continue farming this way. However, unrelenting pressure to produce more for less, is leading them to quit milk production at an alarming rate. According to Food Standards Association (FSA) figures, there were 106 fewer milk producers registered in England & Wales at the start of February than on January 1st this year.

Free Range milk is not a new concept; it is a term I began to use, back in 2011, to identify a tried and tested way of producing milk, founded on the seasonal grazing of dairy cows. Despite assurances, from those who process, distribute and sell milk, the Pasture Promise logo is the only label on milk and dairy products that requires cows to spend at least half of the year outside in fields. We have no reason to hide behind woolly averages, or to trade off a token gesture to grazing, when freedom for cows is at the heart of our mission.

If we are to establish real value in free range milk that delivers what farmers, cows and consumers need, we must establish a clear standard. Failure to do this, will lead to a plethora of confusing labels and devalue the work we have done. The Pasture Promise scheme was created by farmers, for farmers and represents a clearly defined farming system, to give those truly committed to keeping cows in fields a chance to win the recognition and reward they deserve. We know our members are committed to giving their cows the freedom to graze, but we want to build integrity and trust in the promise that they are making. That’s why farmers producing free range milk under the Pasture Promise logo, are now independently audited by the certification body SAI Global.

Dairy companies and retailers who rely on a milk supply, fed by both farmers who do and don’t graze their cows, are understandably reluctant to declare details of the life cows have on farms. It is this ‘blending’ of milk from different farms, in pursuit of effective logistics and cost savings, rather than taste and provenance that leads to the bar being set so low when it comes to grazing requirements. Images of cows in fields on milk bottles and in the dairy aisles are still common place, even if milk comes from cows housed all year round. Others fearing awkward questions, promote an “access to pasture” message, often requiring cows to be grazed for as little as four to six hours a day.

Meanwhile, the Organic sector assert that all organic dairy cows are free range, although Soil Association standards around grazing (or access to pasture) appear to be rather vague and may be open to interpretation by farmers. This is very frustrating, as it compromises the opportunity for non-organic farms, who demonstrate a clear commitment to freedom for their cows, to establish badly needed identity and value in their milk. We are trying to find a way to prevent them leaving the industry, or evolving into ever bigger and more intensive operations. We believe organic producers and others, should publish ‘real’ data on the number of days (and hours) cows are grazed on individual farms and reveal just how ‘free range’ the cows producing their milk really are.

We have sent out a Press Release, which you can find here, to ask the media to help us raise awareness of the lack of transparency about how many days cows really spend at grass.

We work with a network of farmers from the Yorkshire Dales to the Cornish coast and no two farms are the same. Topography, soil type and rainfall all have an influence on the ability to grow and utilise pasture. But, in my experience, the limiting factor on the number of days cows are grazed is largely determined by the system farmers choose to adopt. Although the weather varies from season to season and year to year, we find farmers everywhere who are able to meet our 180 day standard and, usually, surpass it. That’s because the Pasture Promise scheme was founded on a commitment to freedom for cows and we invited farmers who could fit the criteria to join, rather than build a scheme around what suited an established group of producers. 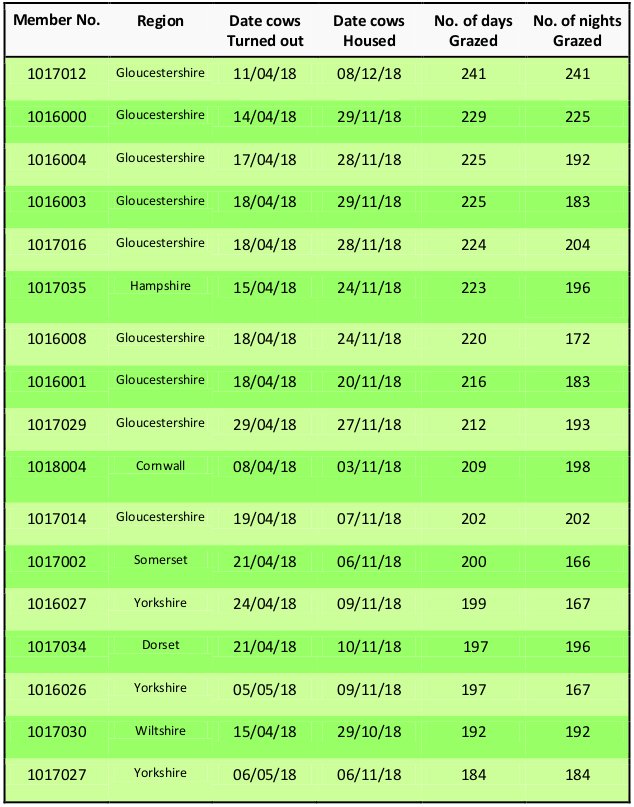 As I’m sure everyone can still recall, 2018 was certainly a year of changing seasons and the turnout dates and housing dates in the table above highlight this. Heavy snow in February and March was followed by heavy rain and floods in April, which delayed the date cows were turned out by as much as a month on many farms. This changeable start to the grazing season was then followed by one of the most prolonged dry spells in living memory. However, I am pleased to say that all of our farmers still achieved the minimum requirement of 180 days at grass, with many still managing to keep their cows at grass for well over 200 days, thanks largely to an unusually dry end to the autumn.

The longest grazing season achieved in 2018, was by a farmer in Gloucestershire, supplying free range milk to Cotteswold Dairy, in Tewkesbury. He managed to graze his cows for 241 days and nights, before finally fully shutting them inside on December 8th. The earliest anyone managed to turn their cows out in the spring was April 8th, which was three weeks later than some achieved in 2017. Typically, cows were grazed for a week less in 2018, than they were in 2017, due to the wet spring. You can find full details of 2017 grazing dates here.

Some may question whether it is right to insist that cows must be grazed for at least six months of the year, when extreme weather events or a shortage of grass might compromise the wellbeing of free range cows. That’s why we allow farmers to apply for a derogation to temporarily house their cows under these circumstances. Our default position is that cows must be free to graze day and night, other than when there is a real threat to health and welfare.

Cows are still inside on Free Range Dairy farms as I write this but, already, with the days getting longer, our thoughts are turning to spring and the joy of seeing the cows once again gallop excitedly back into the fields.

Let’s make 2019 a great year for cows; please support us and ask for the Pasture Promise logo wherever you buy milk.