Fall Back in Love with Milk 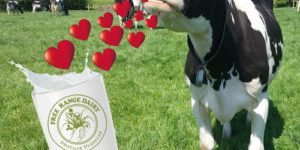 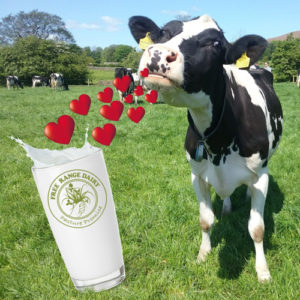 From recent media stories you might think that dairy is to blame for all the bad things happening to our health and the planet. But milk and dairy products, especially from pasture based systems, have been part of our heritage for thousands of years and we’ve not only survived, but thrived on it.

People have fallen out of love with milk for several reasons. Milk is taken for granted, splashed into tea and coffee daily, with little thought about how it was produced. Bland tasting ‘white stuff’ in many instances, providing little joy in its consumption. This is due to the consolidation in the dairy supply chain that pools milk from thousands of different farms, stripping it of its provenance and taste, so milk from large intensive dairy farms is mixed with smaller family farms. We believe that, by allowing people to choose milk from traditional grazing herds, we can make milk great again.

When fat was mistakenly seen as contributing to heart disease, we were told to give up full fat. Instead of making us slimmer, obesity rates rocketed. Our recent talk with Dr Tony Butler discussed this very fact and he himself, cut out carbohydrates in his diet, whilst maintaining his intake of healthy fats from meat and dairy and lost weight as a result.

The processed food we eat today is a relatively new thing and we can plainly see the negative impacts it having on our health through the rise in obesity levels. The EAT Lancet guidelines will only serve to increase this trend. The added fats and oils (mostly from unsaturated fats) as well as flours and cereals (i.e. rice, wheat and corn) that have exploded in our food system and tracked closely with the rise in obesity of the past half-century.

The Lancet report lumped all types of dairy systems together, highlighting the worst to almost scare people into making radical changes to their dietary habits. They did not look at regional distinctions and it wasn’t until towards the end of the report that systems based on pasture were even mentioned and how they can provide a valuable way to sequester carbon into our soils. In the UK we have an abundance of grass which plays a part in carbon sequestration, and this is a great way to produce milk and dairy. Unfortunately, this is the very type of dairy farming under threat, as farmers come under pressure to run bigger herds of cows.

Large intensive farms can hold up to 2,000 cows who never go outdoors, it changes the nutrient value of the milk and contributes to environmental damage. The driving force is to produce an abundance of cheap milk. A great way to save money for shoppers, but we have undervalued milk at a cost to cows, the farmers, the countryside and even our health.

Without doubt there is a lot of milk from intensive dairy systems in our milk pool today. We often say “not all milk is the same” but we need to add “not all dairy farms are the same”. Valentine’s Day, with love in the air is a great day to stop taking great milk for granted and show some love for milk from cows that graze outdoors from natural resource.

We want people who enjoy drinking milk and eating dairy products to be able to make an informed choice and the Pasture Promise logo was created to enable people to make this choice. This is the only logo to stand for milk from cows that graze a minimum of 180 days and nights per year, using the natural goodness of pasture to produce great tasting milk and helping the planet.