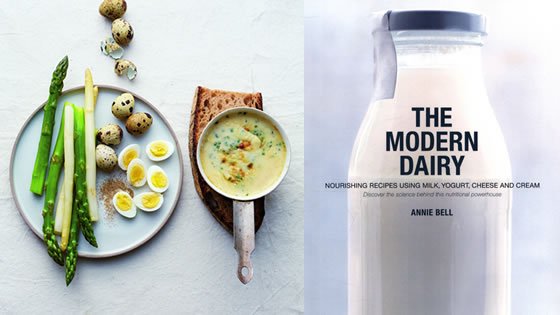 Fondue is a dish that can sink the boat: it is almost impossible to stop dipping into that big pot of molten sin once you start. So coming up with a respectable alternative that didn’t eat up a month’s worth of saturated fat in one sitting has been simmering at the back of my mind throughout the writing of this book. And the only fault, I hope, that you will find with this elementary knock-together is that it would be quite nice to have another one. If you do, it is still within a day’s healthy eating. It’s a doddle to make, well within the remit of poached eggs on toast, and it makes for a fab supper. Add in some cooked spinach and you have Eggs Benedict.

Green asparagus has become a year-round feature in British food stores, but there is a window of April and May when thick white spears take up residence next to the green, and the two together make for a lovely duo with slightly different flavours and textures. But it could of course be the green on its own. There is also a stable of cheeses to choose from that will be just as gorgeous and melty as the Comté – Abondance, gruyère, Emmental and raclette are all contenders.

In advance of making the fondue, bring a large pan of salted water to the boil. Trim the asparagus spears where they become visibly woody, and peel the stalk within 1–2cm of the beginning of the tip.

Blend the cornflour with a couple of tablespoons of the milk in a small bowl. Heat the grill. Bring the remaining milk to the boil in a small non-stick saucepan, stir in the cornflour mixture and stir continuously until the sauce thickens, then remove from the heat. Whisk in the mustard and season with nutmeg. Stir in the Comté and the chives, spread over the base of two small shallow ovenproof bowls, scatter over the Parmesan and pop under the grill for about 5 minutes until golden and toasty.

Put the asparagus into the pan of boiling water at the same time as grilling the fondue and cook for 4–5 minutes until the thickest part of a spear slices with ease. Drain the spears into a colander.

Serve the fondue with the asparagus, the quail eggs, celery salt and bread for scooping.

HIGH IN FOLATE | SOURCE OF VIT B2, CALCIUM, PHOSPHOROUS