A survey in The Grocer last week asked a pertinent question, in light of the vegan campaign against dairy in the UK, ‘Do Brits think Dairy is Scary? ‘

The Dairymen 2017, published by The Grocer commissioned exclusive consumer research from Harris Interactive to find out the truth behind British attitudes to dairy and it found some interesting information on what the public think about dairy in 2017. 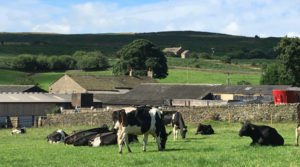 Last year I went to a seminar on Clean Labelling, a bit like Clean Eating, Clean Labelling is a concept that promotes healthy eating via transparency on food labels. It promotes terms related to the ingredients and a lack of artificial ingredients such as free range, free from, gluten free, sugar free and a host of other phrases that are becoming part of our food language.

It shows that lots of people are becoming more health conscious and want to know what’s in their food. Also, this year vegan organisations have put a lot of energy into trying to get people to ditch dairy for plant based alternatives and we have seen a rise in plant based drinks, in part due to scare stories about how the dairy industry is run. I don’t want to use a broad brush to paint all vegans the same, or all plant based dairy free drinks as having the same impacts on the environment. But, I do feel that the horror stories they tell could be doing just that for the dairy industry when clear information and education is key, if we are to be encouraged to make more informed food choices.

I’ve been a vegetarian for 30 years and I gave up meat in part due to what was called the Hamburger Connection, which highlighted how some of the world’s biggest food companies were driving the deforestation of the Amazon and the impact this was having on animal welfare, the local communities and the environment. That was my choice and when people asked me I was happy to share the information I’d researched.  I believe that if an animal’s life is taken to provide food for humans, then it should have the best life possible. I believe the same for milk and dairy and that’s why I set up Free Range Dairy Network with Neil Darwent. 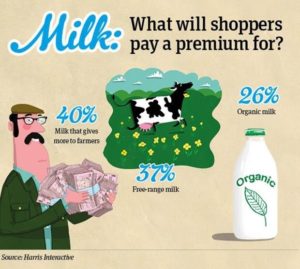 Until we set up Free Range Dairy Network, the term free range in relation to milk didn’t exist, but in three years we’ve demonstrated that people want milk from cows that graze outdoors and pays farmers a fair price. The Pasture Promise logo is becoming a symbol of the move to Clean Labelling of milk.

When they surveyed 1,000 people as part of The Grocer survey, Harris Interactive found that the group with the highest numbers ditching dairy were the 16 to 24 year olds, which is at a time when people of that age need to be storing up calcium, vitamins and minerals in their bones that will set them up for a healthy, osteoporosis free old age. Up to 90 percent of peak bone mass is acquired by age 18 in girls and by age 20 in boys, which makes youth the best time to “invest” in one’s bone health. With some studies suggesting bone mass continues to increase during the third decade to reach a peak between 30 and 35 years.

Who is cutting back on dairy?

What is missing from the narrative around dairy is that the story around plant based drinks used in coffees, teas, etc, is also not without problems for the planet. One oat drink I saw had a high amount of palm oil in the ingredients. Palm oil has been blamed for deforestation, land grabs as well as contributing to climate change. Almond milk is another that might be seen as good for you, but is not so great for the planet. It needs huge amounts of water to cultivate, which has had a big impact on the water supply in California, which grows most of the world’s almonds and is already facing water shortages. Also pesticides used on the almond trees ended up killing populations of bees brought in to help pollinate the tress.

It would appear that no food production system is without some negative impacts on people and planet. All we can do is try to mitigate those impacts and stay as close to nature as possible. We know cows love to be outside, which is 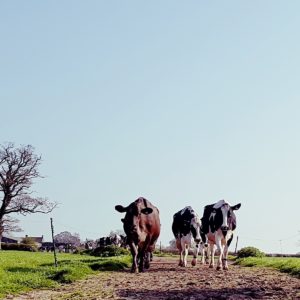 why the Pasture Promise logo ensures that cows graze a minimum of 180 days and nights per year and rewards farmers. By promoting the true value of traditional dairy farms where cows are seasonally grazed in fields, we can ensure more of our milk will come from free range herds and not from intensive, zero grazed systems.

We must be on the right track as in the same survey the respondents said that they will pay more for milk that’s free range and pays farmers a fair price for their milk. These are the core values of our social mission and it’s great to see that shoppers want this from their milk and dairy. In the end, as this survey shows, it is consumers who have the power to shape the food and farming practices of the future, so let’s make sure we give them clear information on how that food was produced.