Putting nature back into milk 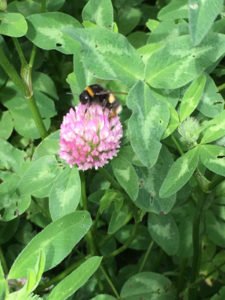 The recently released State of Nature Report with contributions from more than 50 conservation groups, claims ‘policy-driven’ intensification of farming is a significant driver of nature loss in the UK. The report assessed 8,000 species and found that one in ten are threatened with extinction.

In a report by BBC Environmental Correspondent, Claire Marshall, lead author of the State of Nature Report, Mark Eaton, claimed farming practices over recent decades have had the largest single impact on the UK’s wildlife. Between 1970 and 2013, 56% of farmland bird species have declined, with loss of habitat and more intensive farming to blame. However, speaking on BBC Radio 4’s Farming Today programme, Vice President of the NFU, Guy Smith, said he was a firm believer that there has been no intensification of agriculture over the last 25 years, adding “to attribute any damage to intensification of farming post 1990 doesn’t make much sense to me”. Martin Harper of the RSPB responded by saying “Agricultural policy and the markets obviously shape the activity of farmers” and he agreed that many farmers do good things for conservation and wildlife, often supported by agri-environment schemes. But, he felt that in reality, not enough has been enough to address the global picture, with many species still in decline.

Much of the reporting around the findings of the State of Nature Report has focussed on large-scale arable farming. The report asks “Why is farmland wildlife changing?” and its assessment of the reasons for decline is summarised as follows:
“Although there are still some farming systems that are of high value for nature, most of the changes listed can be attributed to a drive to maximise yields. Modern agriculture tends to simplify the landscape, with larger machinery and more specialised farming systems taking over from traditional mixed farming methods. These changes have increased agricultural yields substantially, but they have also had unintended consequences for the environment”.

The report also makes reference to the impact of farming practices such as timing of ploughing, harvesting, mowing and grazing, a loss of mixed farming, a move away from crop rotations and the use of fertilisers, pesticides and veterinary drugs. In dairy farming, we are witnessing the impacts of policy-driven intensification and the way in which markets shape the activity of farmers. According to figures from AHDB Dairy, producer numbers in England and Wales have fallen from 13,543 in September 2006 to 9,517 today – a loss of 30% in ten years. In the same period cow numbers have fallen by 6%, whilst milk output has increased by around 1 billion litres (9%), thanks to a rise in average annual milk yields of over 900 litres a cow. So, undoubtedly, dairy farming has intensified.

Historically farming and food production grew on the back of what nature afforded us and that’s why cereal and vegetable production became established in East Anglia, dairy and beef in the lowlands on the western side of the British Isles and sheep in the hills and uplands. This agricultural ‘demographic’ is still visible today. But, innovation and technology are severing the ties between nature and farming and, as more and more ‘middlemen’ seek to slice profit from our food between farms and households, it is the supply chain that is shaping the farming systems that feed us. In the case of milk, logistics are key to extracting a margin on the journey from farm to fridge and logistics drive consolidation in the dairy chain. Around 80% of liquid milk sold in Britain is purchased in the major supermarkets and most of this milk is now processed and bottled by two giant dairy companies – Arla and Muller. 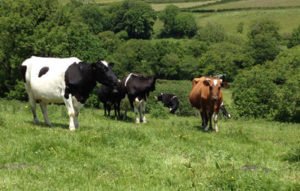 So, how do these changes in the supply chain impact upon the dairy farms that supply our milk and the state of nature? As I have already highlighted, firstly there are less farms producing milk (a lot less). The result is a concentration of milk production onto fewer, larger farms where milk yields are increasing year on year. We are witnessing the growth of new ‘industrial’ units, where cows are often confined indoors 365 days a year, to obviate the uncertainties of the seasons and ensure the delivery of consistently high volumes of milk all year round. So dairy farming, in many instances, is becoming a lot less nature dependant, as we find ways to override the constraints it once imposed and many in the farming industry argue that these changes and the relentless pursuit of higher output from farmland are vital, in order to feed a rapidly growing world population. But, farming’s increasing disconnect with nature is mirrored by the consumer’s disconnect with food and nowhere are the consequences of this more clearly reflected than in the lack of value in milk.

British dairy farmers are currently trapped in a volatile global commodity market, in which milk has been stripped of its provenance and rendered little more than white water. We must create an alternative vision to the relentless pursuit of higher output from cows and farms if we are instil real value in milk and safeguard our ‘natural capital’. The current system is failing both those who produce milk and those who consume it, as well as the cows we keep and the ecosystem in which we operate. Farmers are going out of business, obesity is rising rapidly as sensible dietary information is drowned out by commercial propaganda, sentient farm animals are becoming little more than cogs in a machine and the world around us is bearing the crippling costs of short term greed. Change is needed and it is needed now. But, only by mass consensus to take responsibility for what needs to be done will we achieve it.

Free Range Dairy Network does not claim to put nature first – we have arrived a bit too late to establish that. But, we do want to put nature back on the agenda for British dairy farming and reverse the trend towards dairy devoid of the flavour and richness of the world around us. We want to promote a farming system that takes a holistic approach to nature and cultivates a better understanding of what we can all gain from it. Our mission is to instil value in traditional dairy farms where, firstly, the cows enjoy something akin to a ‘natural’ life, grazing in fields for at least six months of the year. From this we can promote the benefits to the wider world, in terms of biodiversity and environmental impact, the taste and nutritional value of milk from these farms and the enrichment of our farming communities. So Free Range Dairy Network is about people, cows and planet and the Pasture Promise label you will find our milk and dairy products represents the commitment that farmers and dairy companies have made to join us in delivering our mission.

The rest is up to you. Please help us in our quest to ensure that we allow nature, animal welfare, taste and all things that contribute to the true value of milk, to shape the dairy farming systems of the future. Demand a more informed choice by asking for the Pasture Promise label whenever you buy milk.