There have been stories in both The Sunday Times and The Telegraph recently, about the anticipated exodus of up to 2,000 farmers from the UK dairy industry in the coming year, as the milk crisis continues unabated. The Oxford English Dictionary defines a crisis as “a decisive moment” or “a time of danger or great difficulty”. Well this is certainly a decisive moment for those 2,000 farmers contemplating the prospect of losing their livelihood and perhaps the family home and it’s easy to see why this a time of danger and great difficulty for them, but what about the cows? What happens to them in the midst of all this turmoil?

It was a sad day for David and Ruth Archer when they waved goodbye to their dairy herd in last Friday’s episode of The Archers. However, David and Ruth already have a plan to start again and go back into milk with new cows and a fresh approach. But, on most farms this isn’t the case – the cows are gone forever. Gone to pastures new one hopes and maybe life will been greener on the other side of the fence. But, none the less, starting a new life on another farm is a traumatic experience for cows. 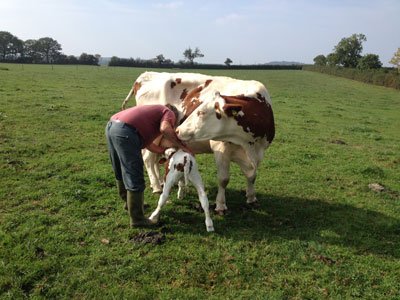 Cows form a strong bond with the people who care for them and become accustomed to daily routines and the way in which they are handled. They have a strong sense of smell that informs them of what’s going on and who is around, they recognise voices and they are often nervous of strangers. On small family farms, the people who raised them as calves are often the same people who milk them when they get older, trim their feet, help them give birth to their own offspring and tend to them when they are unwell. I have had the privilege of forming this bond with cows for so much of my life and I am so lucky to truly know them. This is one of the reasons why the prospect of a mass exodus of farmers concerns me so much.

According to DairyCo figures the average herd size in the UK is around 133 cows. This means that, if 2,000 dairy farmers quit in the next 12 months, something like 266,000 cows will looking for a new home. Add to this the younger cattle being reared as herd replacements and we have around 400,000 animals potentially on the move this year. Unfortunately, a number of these trusted, loyal servants probably won’t get the chance start a new life somewhere else, as they will have reached an age where other producers see little value in them, leaving the exiting farmer with no option but to cull them.

The trials and tribulations of British dairy farmers are well documented and nothing I read or hear gives me confidence they will be fixed any time soon. Whether or not you consider the plight of farmers an inevitable consequence of ‘progress’ and the modern world, please just spend a little time thinking about the wider consequences of what’s going on. The impact on the countryside and our cows in particular. As farm numbers decline and dairy herds get bigger, many cows will leave behind the green fields and families that they know and enter a whole new world of industrial milk production. Not only will their lives change forever but, ultimately, so will yours and that of generations to come. The loss of traditional, seasonally grazed dairy herds will mean the dairy in your diet contains more and more commodity ‘white stuff’, rather than healthy milk from grass. The patchwork of small farms that weave the tapestry of our rural landscape will fall into disrepair and when you glance over the hedge, as you drive past the cows won’t be there. They have gone – economic migrants seeking a new home.

These are your cows. The nation’s dairy herd. They feed you and nourish your children. Please help us to look after them. You can find out more about what we do here.