Last weekend I drove up to Manchester to attend Cup North at the Victoria Warehouse. It was a fascinating event bringing together coffee roasters, baristas, coffee machine suppliers and coffee connoisseurs from all over the country. There were films about the origins of coffee, ‘cupping’ competitions and barista demonstrations, all engulfed in a heady aroma of fresh coffee.

Whilst some people like their coffee black, milk is one of the key ingredients in coffee shops where the flat white is king and lattes abound. In fact, one aficionado told me that something like 60% of what coffee shops produce is milk. Fortunately, our pioneering Pasture Promise partners, Stephenson’s Dairy from Morecambe in Lancashire, were on hand to provide milk to all those exhibiting at Cup North and we were able to hear first hand what they all thought about free range milk. 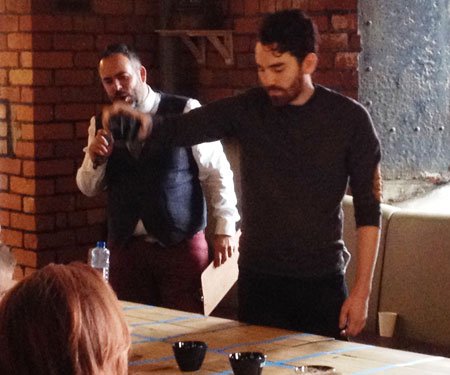 I have to admit at this point that I still have some things to learn about milk and I was lucky to find myself in the company of experts who treated milk with the respect it deserves. The way in which milk behaves when steamed by a barista has a big influence on the cup of coffee they serve. I even met a man who services coffee machines, who told me the first question he asked when someone reported a problem is “What milk are you using?” Without pretending to understand all of the science behind this, it seems the frothing capacity of milk is influenced by its freshness, because as proteins break down in the milk the capacity to froth is reduced. Baristas also said that the ‘sweetness’ of the milk is key in delivering great coffee.

I met one coffee shop owner at Cup North, who recently switched to buying free range milk from Stephenson’s Dairy and who has now put up a sign in the shop asking customers to try their coffee before they add sugar. Reports of a sweet taste to the milk were repeatedly borne out by dozens of people, who stopped to sample some fresh Pasture Promise milk between their doses of caffeine. We even had a few who came forward saying that they didn’t like milk, walk away licking their lips and talking of buying it.

I have known for a very long time that not all milk is the same and Cup North was a wonderful opportunity to help other people understand that. It is clear that milk from grazing cows has a distinct taste and a number of other qualities that have real value in different outlets. Free Range Dairy is urging dairy farmers to think of the milk they produce as something more than a cheap commodity and to define the value in the farming system they run. The life we give our cows, what we feed them and where we farm has a massive impact on the milk they produce – I think the French call it ‘Terroir’. At Cup North everyone understood how the terroir influences the quality of the coffee beans they use and they talked endlessly about it. It’s time we celebrated milk in the same way and created a movement of dairy connoisseurs who will help to instil the deserved value in milk from traditional, pasture-based farms.

Thank you to all who organised and attended Cup North for delivering such an inspiring event.