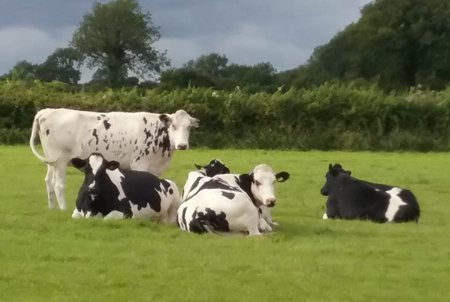 We have been running a Pasture Promise pledge for farmers for many years but now we want everyone to show their support for clearer labelling on their milk, so consumers can make an informed choice.

We are very much about promoting “traditional, seasonally grazed dairy herds” in all its forms. We believe it’s best for cows, communities and consumers as well as farmers.

Traditional dairy farmers are going out of business not because they are inefficient as some newspaper articles would have you believe but because their faces doesn’t fit. It’s easier to pick up milk from larger farms than a group of smaller ones dotted around the countryside. Farms producing high volumes of milk often receive volume bonuses, because they make milk collection cheaper, again putting smaller farms at a disadvantage, even though an oversupply of milk is a big contributor to the current dairy crisis.

The odds are really stacking up against these farmers and unless we show the decision makers that consumers want milk from pasture based farms, then you might be left with little choice than to buy milk from an intensive farm. The Duke of Westminster who runs a “zero-grazing” dairy unit is Tesco’s largest UK milk supplier but you won’t see that on the milk label.

The seasonal grazing of dairy cows is a way to work within the environment and not impose upon it.  Milk from a predominantly grass based diet is full of vitamins, minerals and healthy fats as well as calcium and protein. A great healthy product that’s good for us but that’s not the only benefits of cows grazing in fields as this encourages and supports our flora and fauna. Pasture based dairy farmers are the custodians of the countryside.

The current dairy crisis is blamed on an oversupply of milk. But without our knowledge or even in consultation with consumers the dairy industry has been gearing up to intensify its dairy production in the UK for years. I heard the former NFU President at a Conservative fringe event in 2012 say that dairy farmers needed to get big or get out. The NFU policy that followed in 2013 was Compete to Grow, about ramping up production to feed the 9 billion and capitalise on new emerging markets. DairyCo in March 2015 held its dairy conference which seemed skewed towards promoting intensive dairy farming which is still in the minority, rather than promoting the majority of dairy farming that are on pasture. All dairy farmers in the UK pay a levy to DairyCo and they say they can’t promote one type of dairy farming over another, but that didn’t seem to be the case at the conference in Wales.

Farmers see adding more cows to their herd to try and produce more milk as a solution to make up the shortfall from low prices. If that doesn’t work what will happen then? Will there be stories in the press about how these cows are being culled as a way to try and push the market the other way?

Free Range Dairy wants to help dairy farmers break free of this boom/bust cycle that unless we properly address farmers will be forced to repeat.  People want to buy milk from UK farmers and as local as possible, they want their cows on pasture and milk to come from cows that graze in fields. We should be looking to secure a strong domestic market that gives consumers what they want and Free Range Dairy farmers can provide this without having to intensify production methods or put the cows on zero grazed systems.

This is why we are asking people to make the Pasture Promise so we can promote pasture based dairy farming and support our farmers and cows.