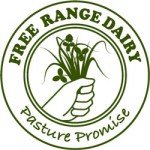 A few weeks ago there was some talk about Fairtrade milk as a way to help farmers in the current dairy crisis. This would be great news for the general public who want to be given the chance to make more ethical food choices including supporting dairy farmers in the UK. This is the reason we set up the Free Range Dairy Pasture Promise label, as a way for consumers to make an ethical choice when faced with cheap milk and no knowledge of how that milk was produced. The label will not only ensure farmers in the UK receive a fair price for their milk and dairy produce but also the cows will graze for at least six months of the year and from this the customer gets a healthy, affordable product.

One of the main issues is how cheap prices or selling their produce as a loss leaders is not only putting farmers out of business but also having a big impact on the way they farm.

The same retail system impacting on bananas from overseas is impacting on milk in the UK and as supermarkets compete with each other to keep retail prices as low as possible, it’s putting our food and sustainable farming at risk.  Where retailers have increased banana prices the decision was reversed following aggressive advertising by competitors. Locking retailers into a negative cycle that pits retailer against retailer for a market share with farmers shouldering the main burden of these practices.

“But while it is absolutely clear that all producers need prices that fully cover their basic costs of production and provide a surplus for those investment. It is extremely doubtful that this can happen while supermarket ‘price wars’ are squeezing value through supply chains, and most critically at the farm level, in the absence of specific measures to support producers.” Britain’s Bruising Banana Wars: Why Cheap Bananas Threaten Farmers’ Futures

Free Range Dairy Network like Fairtrade isn’t just about achieving a fair price for milk and dairy products. It’s about supporting a sustainable farming system that ensures that cows grazing outdoors to utilise pasture as a way to get the healthiest milk possible. It’s also about supporting smaller family farms that means a local supply of milk.

Arguments can be made that with the rise in food banks we need ever cheaper food so milk as a diet staple has to be cheap. But cheap food always comes at a cost somewhere along the line. In this current market situation shoppers are saying they want to pay more to support the dairy industry but aren’t being given a chance. We want shoppers that see the Free Range Dairy Pasture Promise label to know that these farmers are getting a fair price for their milk and the cows are outside for at least six months on grass.

As it says in the report

“The rights of the producers to receive truly sustainable prices and the rights of consumers to purchase ethically and sustainably sourced produce are losing out to the pressure for the lowest possible prices, regardless of the true cost.”

This is true of dairy farmers in the UK as well as banana farmers in developing countries.