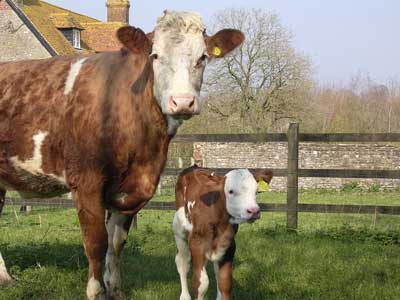 Imagine a dairy farm running 50 cows, which were milked once a day whilst their calves were left to suckle until they reached six to eight months of age, producing high quality milk and meat to be processed on farm and sold direct to local customers.

The herd I have described above sounds very old-fashioned and lots of reasons not to run a herd like this spring to mind, like:

So why am I wasting time thinking about it?

My experience with Montbeliarde cows has taught me that a dairy cow has so much more to offer than just 1,000’s of litres of the ‘white stuff’ and there is considerable scope to simplify our farming and reduce costs. Think about the following:

Financially how does this look? Are the savings in calf rearing costs, labour and feed combined with gains in milk value, calf health, cow health, beef income able to deliver a higher margin than a herd of cows milked twice a day with calves hand reared from two days of age?

Well, I haven’t got all the answers but I think this is worthy of further investigation and I do know one or two farmers are trying this system. One of them is David Finlay, who milks around 140 cows with calves at foot to produce his Cream O’Galloway ice cream up in Scotland. Another is the Calf at Foot Dairy in Suffolk, run by Fiona Provan, where her Jersey cross cows are managed to Pasture Fed Livestock Association (PFLA) standards.

I am interested to learn more about the practicalities and economic of such a farming system. If anyone can provide with further information please get in touch.