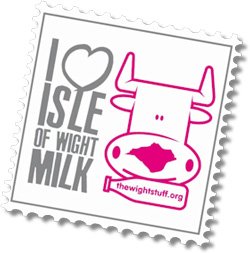 I have just been reading about a great campaign put together by dairy farmers on the Isle of Wight, which has established a brand for milk produced on the Island– The Wight Stuff.

Back in the 1960’s there were over 300 dairy farms on the Isle of Wight but there are now only 16 left. Campaigners organised a petition asking Islanders to back calls for supermarkets on the Isle of Wight to sell milk produced and processed on the Island, “giving islanders and visitors an opportunity to support local farmers and our Island economy”. The milk is now available in Southern Co-operative and Tesco stores in Cowes and Freshwater and it is hoped it will soon be available in smaller shops across the Island.

One of the objectives of the Wight Stuff campaign is “to protect the beautiful green pastures of the Island by keeping enough of an Island herd to graze them”. So, it looks like the people of the Isle of Wight will be enjoying milk from free range herds too. Well done to all those behind the campaign, I’m sure you will inspire others to explore local marketing opportunities.