Coincidence is a curious thing. My mother was showing a few family heirlooms to my wife yesterday and stumbled across a fascinating document produced by the NFU in 1924. This was the year that Lenin died and was buried in Moscow’s Red Square, the 8th Olympic Games were held in Paris, Ramsey MacDonald formed the first Labour government in Britain and companies owned by Gottlieb Daimler and Karl Benz merged to create Mercedes-Benz. These events are beyond the recall of most living souls today. However, the piece of paper dated April 1924, lining the bottom of a wooden box containing photos, brooches and an unhealthy assortment of local obituaries, was an appeal to dairy farmers that sounds as if it was written yesterday. It refers to the success of the NFU Milk Scheme in the years 1922-23 and 1923-24, which it states has “undoubtedly been of great assistance to all dairy farmers who have sold their milk on the terms of the Scheme”. The document talks of a big effort to strengthen the organisation of producers to “maintain fair prices and contract conditions”  in every county in England and Wales. Farmers are urged to join their local NFU so that “The County Milk Committee may speak and act for all producers in the county”. It was further suggested that the NFU would negotiate contract terms for all milk going into each of the regional areas, through the Joint Committee of Producers and Distributors.

The document then assures producers that they will get:

a) twelve months’ contract from October 1st each year, and
b) A fair price for their milk whether it enters into liquid consumption or is manufactured into cheese, etc.

Despite the years that have passed the closing message is exactly the same as that which we are hearing today. “Remember that Unity is Strength and if you want to help yourself and strengthen your position as a Producer you must

Take a look at the original document below and ask yourself “What have we learnt over the past 90 years?” I believe Free Range Dairy can bring about real change in the fortunes of UK milk producers and leave a legacy that future generations will be proud of. 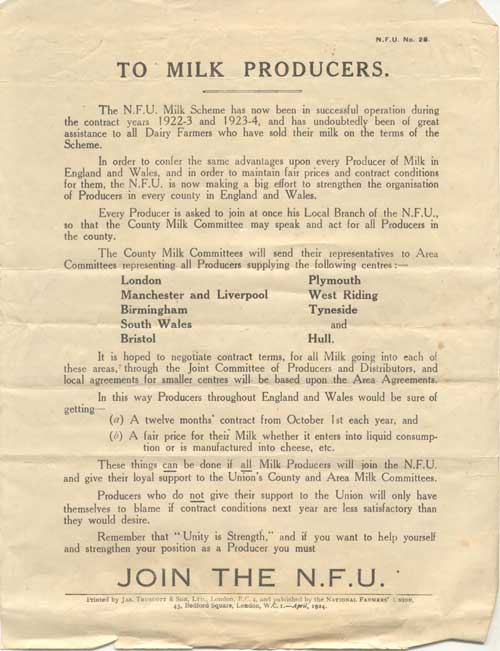