For many, the images of dancing Jersey cows from the Anchor Butter adverts will perhaps best convey the image of free range cows. An increasing number of UK milk producers have been switching towards a ‘New Zealand style’ dairy farming system, because it is all about low cost milk production. For decades New Zealand dairy farmers have made good use of their climate and soils that enable them to grow a lot of grass and graze cows for much of the year. But Free Range Dairy is not simply about adopting milk production practices from ‘Down Under’.

Milk production in New Zealand is essentially founded upon seasonal milk production, with farmers trying to produce as much milk as they can through the spring and summer months. In the Northern Hemisphere, this means that the cows are all calved in February and March, just as the grass is beginning to wake from its dormant winter state. As the cows calve they are then turned out onto pasture to enjoy the new season’s growth. Through careful management of the pasture – allocating the right amount to the cows each day – there is little requirement for any supplementary feeding of the herd. As autumn comes along the grass growth begins to slow. But, by this stage the cows have been milking for seven or eight months and their daily milk yields begin to decline until, after 10 months in milk, the cows are ‘dried off’. This means that the farmer stops milking the cows and they enjoy a two month holiday before commencing the next lactation the following spring. At same time, the farmer can enjoy a Christmas break, with no cows to milk for a few weeks.

The key strengths of a New Zealand style (or spring calving) system can be summarised as follows:

The challenges to running a New Zealand style (or spring calving) system can be summarised as follows: 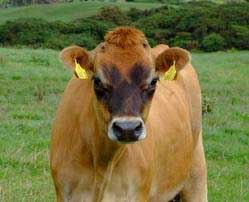 The breed of choice for farmers operating this kind of dairy farming operation is often the Jersey, or a crossbred cow that contains a mixture of Jersey genetics and those of black and white cows, or others. The aim is to breed a small cow that treads lightly but has the capacity to convert grass into milk of a high quality. In this instance, quality means high levels of fat and protein. These components of the milk are highly valued in producing butter and cheese, whereas they are less important in herds producing milk for liquid consumption. This again indicates why a Jersey cow or crossbred is popular amongst spring calving herds selling milk for manufacturing. Farmers running this type of cows often measure their productivity in terms of the amount of milk solids (fat and protein) they produce from each hectare.

Whilst I am envious of the simplicity of this system and it certainly delivers free range milk, I am not insisting that all Free Range Dairy producers take this route. As I explained earlier, our country has a requirement for milk all year round and we need to balance the milk coming form these spring calving herds with that from other farms where the cows are still grazed for much of the year, but have a different production profile.

Traditional free range in the UK 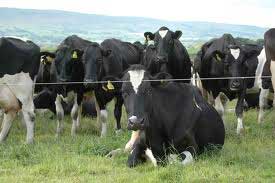 A long time ago a large number of UK dairy herds operated a rather different system to that found in New Zealand. Many farmers calved their herds in the autumn (October to December), housing their freshly calved animals through the winter and then turning them out to grass in the spring. Today a number of milk producers are returning to this type of system, for a number of reasons:

The autumn calving herd is saddled with some higher costs than the spring calving herd, but this is often compensated by a higher milk yield per cow. Farmers operating this type of system still widely adopt Holstein Friesian genetics (black and white cows).  Some of these animals have been bred for very high milk yields but many, particularly the British Friesian, has remained a relatively small, robust cows with an excellent capacity to convert grazed grass into milk.

Many UK farmers now calve their herds all year round. This has largely been driven by milk buyers offering contracts that reward a level supply of milk (particularly for the liquid milk market). However, some have let their calving pattern ‘slip’ to all year round because of difficulties in getting cows to calve at the same time each year – infertility in dairy herds has risen as milk yields have increased. The costs of producing milk in this way can be higher and the farmer’s response is often to pursue higher milk yields to offset these costs.

This is not intended to be an in depth analysis of the pros and cons of different milk production systems and neither is it intended to provide a detailed definition of Free Range Dairy herds. I hope it will provide those who are interested in where their milk comes from with an opportunity to learn more about why we farm the way we do. Farmers running managing their herds under any of the systems outlined here can qualify as Free Range Dairy producers in my mind. All that is required is a clear commitment to grazing cows for as much of the year as possible. I am currently holding a series of meetings for farmers to decide how we best demonstrate this commitment and I will be presenting my ideas on this over the next few weeks.

Please keep an eye on the website for further details and let me know any questions or comments you have. Thanks.